Home » Blog » How do I Get Around Geo-blocking? The Artful Geo-Dodger

How do I Get Around Geo-blocking? The Artful Geo-Dodger If you’ve never vacationed further from home than L.A. or New York, you’ve likely never experienced geo-blocking before. If, however, you’re like me and you travel all over (or worse: you’re Canadian) you have been met by a screen that looks like the image after the break at some point: 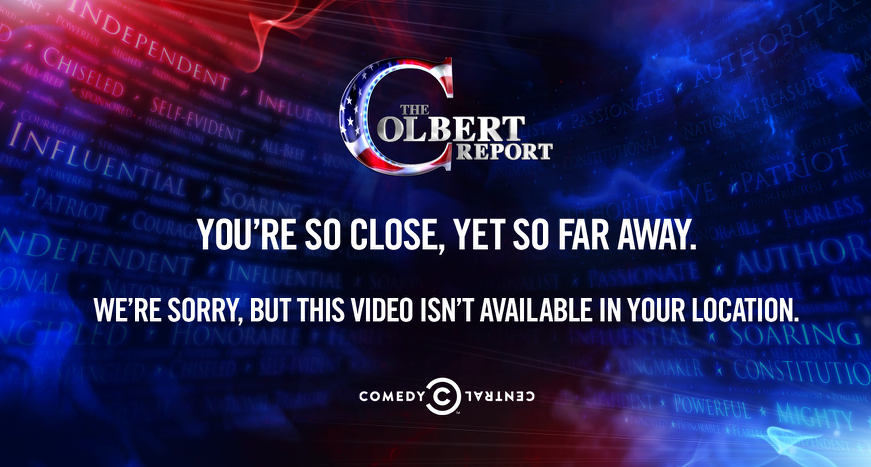 This is what happens when I, in my undisclosed location, tried to watch The Colbert Report on the website for the show. Which was odd and frustrating for a number of reasons. For one, I’ve been to his studio and watched a taping (#humblebrag), and for another the country I’m in plays the show on TV! I can watch it on TV but not on my computer!

Two more commonly seen ones are:

This is what is known as geo-blocking, or geo-gating. Getting around this is known as geo-dodging. Those of us in English speaking countries who want to watch American shows online know all about it, so what can you do about it?

How do I Get Around Geo-Blocking?

Getting around geo-blocking is something that has desired by my fellow Canadians for years, Aussies have been seeking a solution just as intently. This is because geo-blocking restricts them from watching all of their favorite American shows, and many websites. You will find geo-restricted content on:

Even my favorite soccer team (Vancouver Whitecaps FC) has geo-restrictions on who can watch them online in some instances – and I worked for those guys! So what’s an ex-pat, or American on vacation, to do?

A solution that more and more people are seeking for its geo-dodging capabilities is technology. We’ve talked about how VPNs increase security  on this blog before, but this is another great bonus of this type of service.

How does a get around geo-blocking?

First off, a website knows where you are thanks to your IP address. Every website looks at them and records the data when you visit it. Check out our own IP Address location tool for proof – websites know pretty much exactly where you are!

A gets you around geo-blocking by assigning you a new IP address. The websites that you visit will read this new IP address and think that you’re in, say, downtown NYC, when you’re actually in Cape Town, South Africa.

This unlocks geo-blocked material and allows you to watch the Netflix account you paid for while you’re on vacation, use Facebook, Google, YouTube or any of the other many blocked websites in China as well as websites blocked in the UK. You need to look at our best VPNs for geo-unblocking right now to get around this problem!

A frees you from geo-blocking on the internet

One of my ‘angriest at a machine’ moments was when I went to sign up for a service, completely legally, that would allow me to watch my beloved Vancouver Whitecaps FC while traveling. I went to the sign in page, entered my information, hit ‘Register’ and was told:

“The very people who DON’T need this service because it’s already on TV there! You incompetent f#<%!^& tool!” I yelled. Maybe I left an angry message on their service urging them to work on a solution for ex-pats, because I can go on watching nothing but EPL and La Liga.

But then I settled down, logged in from a and now I can watch my team when I want, from wherever I want.

So, not only does a service provider give you added security online, granting you freedom from observation, but it also gives you the chance to access things that have been blocked due to silly streaming laws that could be ironed out easily – if the websites in question actually gave a damn.